Dr. Bill Neal retires from the WVU School of Medicine

MORGANTOWN, W.Va. – Former patients, fellow colleagues and students poured through the doors of the West Virginia University Health Sciences Center on Friday (June 6) to share in the festivities of wishing William A. Neal, M.D., a healthy and happy retirement.

Dr. Neal, pediatric cardiologist at WVU Children’s Hospital and professor in the WVU School of Medicine Department of Pediatrics, was honored by many during events on Friday that included comments and testimonials from patients and families, fellow physicians, and students. A lifetime celebration achievement dinner attended by more than 250 people was held on Friday evening at the Erickson Alumni Center. 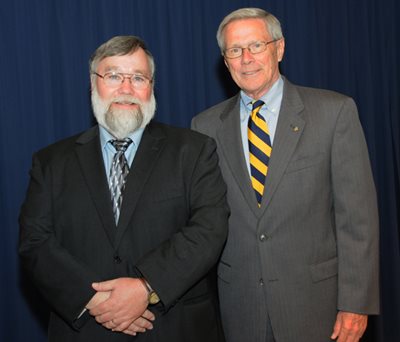 “Bill Neal is the essence of a pediatric physician in that he is kind, caring, and attentive to patients and families and dedicated to improving the health and wellness outcomes of West Virginia’s youngest through his many initiatives and programs,” Arthur J. Ross, III, M.D., M.B.A., dean of the WVU School of Medicine, said. “He will be terribly missed by his colleagues, but the legacy that he leaves behind will serve the School of Medicine and West Virginia well into the future.”

Neal is the founder and director of the Coronary Artery Risk Detection in Appalachian Communities Project (CARDIAC), initiated in 1998 as a means of reversing the state’s disparity in cardiovascular disease, diabetes, and other chronic illnesses. What began as a small school-based, free screening program for elementary-aged children to detect potential heart disease has expanded to a school-based surveillance and intervention imitative, along with a targeted identification and referral for treatment to those individuals with the most severe genetic cause of death from premature cardiovascular disease.

CARDIAC’s services are active in schools in all 55 West Virginia counties and have reached more than 100,000 students since its inception. In 2007, the U.S. Department of Health and Human Services gave the project a national Innovation in Prevention Award for its success in addressing chronic diseases and promoting healthier lifestyles.

“It is difficult for me to imagine a more powerful educator and mentor for healthcare providers than Dr. Neal. I have had the distinct privilege of not only working with Bill but constantly learning from him for the past 30 years. He is the epitome of teaching by example and is as patient and compassionate a teacher as he is a physician,” Larry Rhodes, M.D., chair and professor in the Department of Pediatrics and director of the WVU Institute for Community and Rural Health, said.

“Although he has an international reputation as a leader in healthcare, Bill has the ability to make everyone feel comfortable and important to him. The patients and families he has touched throughout the years could fill volumes with personal testimonies of the compassionate care he has provided. The health of the children of West Virginia has benefited immensely both directly and indirectly from the four decades of Dr. Neal’s service to the state.”

Neal didn’t plan to return to West Virginia after graduating from the WVU School of Medicine in 1966 as he wasn’t sure the opportunity for a budding physician would be available. But, after completing military service and residency and fellowship training, he found himself missing the mountains and the people of West Virginia. In 1974, the Huntington native returned home and joined the WVU faculty.

The decision to return, he said, is one that he has never regretted. Eleven years after his return, Neal became chair of the WVU Department of Pediatrics.

A native of Huntington, Neal graduated from Xavier University in Cincinnati, then earned his medical degree at WVU, where he was the first recipient of the Edward Van Liere Award for medical student research. He continued his training at Milwaukee County General Hospital and studied pediatric cardiology at the University of Minnesota.

Neal also staffs the Pediatric Lipid Clinic in Morgantown and outreach clinics in Beckley, Huntington, Lewisburg, Princeton, and Wheeling. He will continue to be involved in the CARDIAC Program.


Photo caption: Dr. Larry Rhodes (left) and Dr. Bill Neal pose for a photo during an event celebrating Neal’s retirement from the WVU School of Medicine after 40 years of dedicated service.