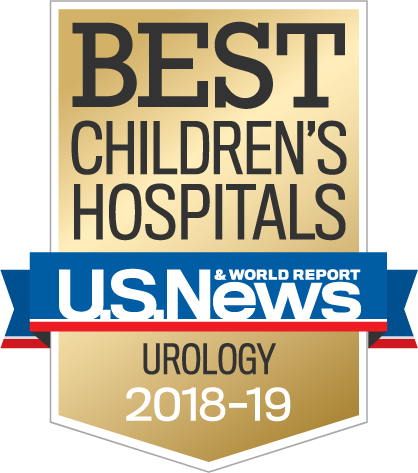 “Our pediatric urology program has consistently been one of our premier programs and was enhanced even further by the recruitment in 2017 of Dr. Michael Ost, former chief of urology at UPMC, as surgeon-in-chief for Children’s. This national ranking is proof of that,” J. Philip Saul, M.D., executive vice president of WVU Medicine Children’s, said. “With our plans to expand our footprint and program offerings when we move into the new tower, we expect even bigger and better accolades for pediatric urology and our other specialties and subspecialties in the future.”

This marks the second national ranking for WVU Medicine, which was ranked 26th in the nation for adult urology last year.

“As a department, our goal is to provide all of our patients with the highest level of care each and every day, and we are honored that those efforts have been recognized with this ranking,” Stanley Zaslau, M.D., chair of WVU Medicine Urology, said. “It is my privilege to lead such an outstanding group of individuals.”

“This ranking is the direct result of the hard work and dedication of the entire pediatric urology team, including our physicians, advance practice providers, nurses, and staff,” Osama Al-Omar, M.D., M.B.A., chief of pediatric urology at WVU Medicine Children’s, said. “I am grateful to be a part of such a dedicated team and to receive this recognition.”

U.S. News introduced the Best Children’s Hospitals rankings in 2007 to help families of children with rare or life-threatening illnesses find the best medical care available. They are the only comprehensive source of quality-related information on U.S. pediatric hospitals.

The U.S. News Best Children’s Hospitals rankings rely on clinical data and on an annual survey of pediatric specialists. The rankings methodology factors in patient outcomes, such as mortality and infection rates, as well as available clinical resources and compliance with best practices.

This year’s rankings will be published in the U.S. News & World Report’s “Best Hospitals 2019” guidebook (ISBN 9781931469906), available in stores late September. The guidebook will also include adult specialty rankings, which are scheduled to be released later this summer.