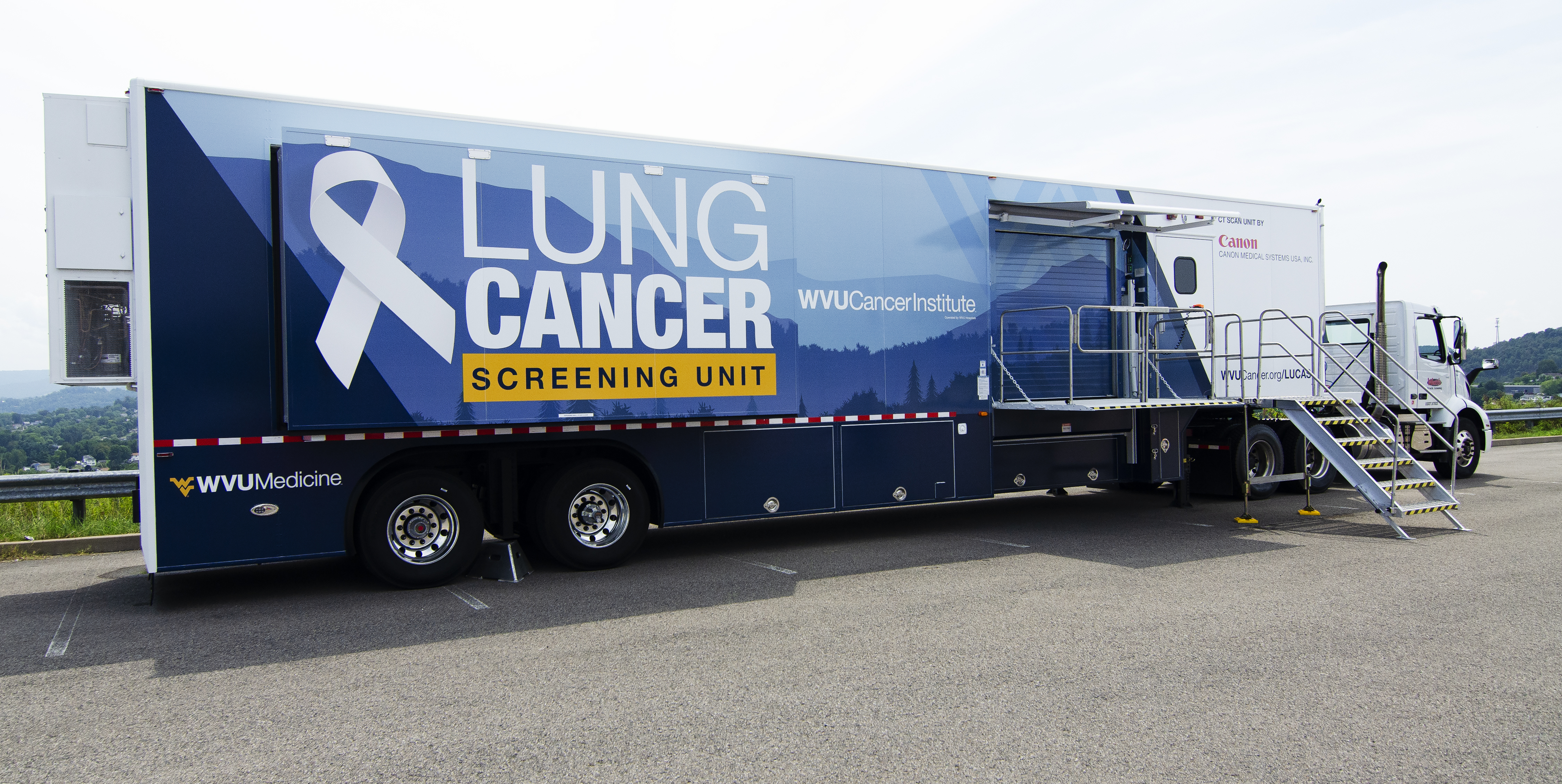 LUCAS returned to Rowlesburg Park, where Bray could conveniently walk to the annual follow-up screening she scheduled at the nearby Rowlesburg Clinic. She understood the importance of the visit more than most: Her father, Bradley Bever, died of lung cancer 20 years ago.

“If he would have gotten screened earlier, maybe things would be different,” Bray said. “I really like this. I can come down here and get checked, maybe early, [and] catch it. It makes my chances better.”

“It’s great to see people getting the treatment they need before they realize they need it and to catch it early before their quality of life is affected, so they can be with their families and their grandkids and continue to take care of their gardens and houses and just enjoy life,” Trembly said.

‘Right down the road’
More West Virginians die of lung cancer each year than colorectal, prostate, and breast cancers combined. Regular screening can detect lung cancer early, when it is easier to treat and cure; however, only 2-4 percent of those eligible for LDCT scans in West Virginia are screened.

“What we’re already starting to see and show is that there’s not a lot of resources for folks in smaller communities and further away from hospitals, so when we come to their community, they’re very adapt[able] and very willing to come and see us [rather] than to travel to a hospital,” Eric Reed, mobile CT technician for LUCAS, said. “There’s been numerous folks that said, ‘I would not have traveled to a hospital for this.’”

Tomma McDaniel, a nurse practitioner at the Rowlesburg Clinic, was among the town’s repeat visitors to LUCAS. She said transportation is often an issue for patients in rural communities.

“The closest place is Morgantown, which would be an hour, hour and a half drive,” McDaniel said. “With no transportation, they don’t have the luxury of getting there. This is right down the road. They can walk to it if they need to. It’s quick, no waiting. To get in and out takes a matter of minutes.”

“It’s wonderful,” Grimm said. “I recently did the mammogram over at [Bonnie’s] Bus, and when they told me about this, I said ‘sign me up.’”

Miles and milestones
Just on the other side of its one-year anniversary, LUCAS achieved another milestone when West Union resident Rockford Zickefoose became the 1,000th patient screened on Oct. 20.

This was Zickefoose’s first experience with LUCAS, but not the first screening he had received. A previous scan, performed in a traditional hospital setting, revealed a spot on his lungs that his physician wanted to monitor through routine screenings.

Even with this knowledge, Zickefoose admitted he was unlikely to repeat the trip for the scan because of the travel and wait time he previously experienced.

Fortunately, his primary care physician was knowledgeable about the LUCAS program and helped him get scheduled for an appointment that was just a 12-minute drive from his house.

“It was very easy,” he said. “I walked right in and was done quickly.”

LUCAS builds upon the success and infrastructure established by Bonnie’s Bus, a mobile mammography unit that provides breast cancer screening throughout West Virginia. Since its inception in 2009, Bonnie’s Bus has performed more than 26,000 mammograms and detected at least 125 cases of breast cancer.

Both units are part of the WVU Cancer Institute Mobile Cancer Screening Program, which operates in collaboration with clinicians, public health professionals, and community leaders statewide to provide cancer prevention services in underserved West Virginia communities. LUCAS currently travels about three days a week and sees six-to-10 patients each day, but those numbers are likely to increase as the program grows.

“They didn’t just scan me; they talked to me,” Sparenberg said. “When I told them my wife died, they kind of counseled me and helped me along. It was a little more than just a scan. They really seem to care.”

Trembly said he and Reed take pride in creating a caring atmosphere, and their commitment to patients extends beyond lung cancer. Screenings performed by the LUCAS team have resulted in dozens of unexpected findings, including an adrenal tumor, aneurysms, calcification of a coronary artery, gallstones, hernias, kidney stones, liver cysts, pancreatic cancer, thyroid cancer, and more.

Reed, a Ravenswood native who served in the U.S. Army, said he’s grateful for the opportunity to serve his home state by helping people live “longer, healthier, happy” lives.

“It’s insane the amount of help we’re actually giving folks in West Virginia,” Reed said. “…We’ve seen several positive lung cancers and … we’ve even found other cancers besides lung cancer, so I think the impact is even better than we thought initially because of those incidental findings. So, we’re helping people find stuff that’s going on with them that they don’t even know is an issue yet.”

Individuals and businesses interested in supporting LUCAS can visit WVUCancer.org/Giving for more information or contact Director of Development Cory Chambers at cchambers@wvuf.org. All gifts are made through the WVU Foundation, the nonprofit organization that receives and administers private donations on behalf of the University and its affiliated entities.