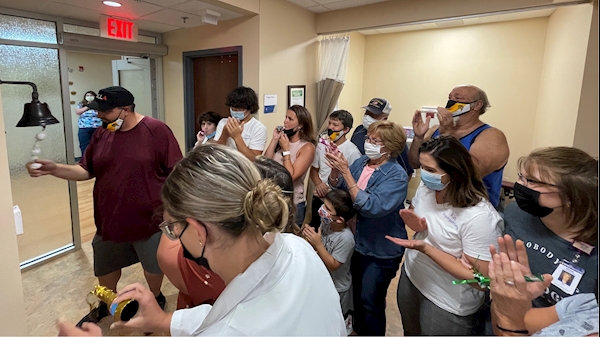 The traditional “ringing of the bell” marking the end of a treatment for cancer patients officially began at the new WVU Cancer Institute at Potomac Valley Hospital recently when Keyser resident Scott Furey became the first patient to engage in the tradition.

Furey was diagnosed with colorectal cancer in October of last year after painful symptoms led him to a local physician’s office. A follow-up colonoscopy showed multiple masses.

“When we found it, we jumped right on it,” recalls Furey.

In deciding where to seek care, Furey chose to consult with Dr. Kevin Shannon, a WVU Cancer Institute oncologist who provides care at Garrett Regional Medical Center and Potomac Valley Hospital. Furey was able to begin treatment immediately, receiving a course of eight rounds of chemotherapy.

Initially Furey received chemo at Garrett Regional Medical Center, but when the Cancer Institute at PVH opened in April he transferred his care to the new center at PVH. He received his last four rounds of therapy at the hospital in his own community.

“As far as my experiences at Keyser, it couldn’t have been any better. Furey stated. “They were truly concerned about how I was feeling between my treatments, not just when I showed up at the center. People may have apprehensions about staying local, because they have an idea that local isn’t ‘good enough.’ As for the cancer center at Potomac Valley, they are more than good enough. They’re great. And I think anyone that has any apprehensions about that should put those to bed and go see that staff, because they are wonderful.”

Furey completed his last chemotherapy treatment at PVH on July 7. In celebration of the completion of his treatment, Scott ceremoniously “rang the bell,” surrounded by family members and loved ones.

“We were able to get Scott in to start treatment quickly, and he responded extremely well to the regimen,” noted Dr. Shannon. "Scott was an absolutely delightful patient, and we will all continue to support him 100% through his cancer journey. It’s really wonderful that the people of Keyser can now receive cancer care in their own community. We need to provide medical care where people live whenever possible. While patients will still need to travel for radiation, it’s significant that they can receive their chemotherapy at their local hospital. Being close to home can help people focus more fully on getting better. And that’s important.”

While Furey has completed his chemotherapy, he still needs radiation to complete his treatment plan. He will soon start radiation treatments at WVU Cancer Institute in Morgantown.

Potomac Valley Hospital is a 25-bed critical access hospital in Keyser, West Virginia. The hospital serves the community of Mineral County, West Virginia and surrounding areas. PVH officially became a member of the West Virginia University Health System in 2014. PVH provides inpatient and outpatient care, including 24/7 Emergency Department services. PVH employs more than 250 healthcare professionals, including over 50 physicians, who are dedicated to our mission of striving to treat every patient like a member of our own family.